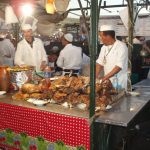 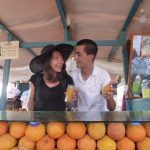 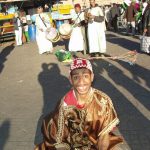 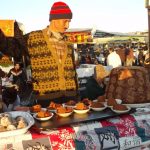 Jemaa el Fna – The Square of the Jugglers

A manual for Visitors

Marrakech is not a grown city, but an urban city planned almost 1000 years ago in all details under aspects urban life development. The heart of this city – at the same time the heart of Morocco – hits the Jemaa el Fna. 365 days a year, there is high activity. Especially in the evening hours until late into the night, there are thousands of people who want to be entertained and dine here. The tourists are rather a small minority, especially in the evening. Nevertheless, there will probably be no visitor to Marrakesh who would not have visited the square.

In the seventies of the last century, the city administration wanted to convert it in a modern shopping center and a huge underground car park. It was the foreigners who lived in Marrakech, who shouted out loudly and prevented the city from loosing its most important cultural heritage. They caused the UNESCO to declare the place to be a World Heritage site, thus protecting it from the plans of the city administration. Today, nearly 50 years later, the Moroccans are also happy that this heritage has not been lost. There are no architectural attractions and no artworks. What to see, or rather to experience, is the expression of the soul of the Moroccan people. The place was declared by UNESCO to be an “intangible immaterial property and heritage of mankind”, a term which was used for the first time in the history of UNESCO. I would consider the Jemaa el Fna as “The Harddisk (or heartdisk) of the maroccan people”.

The place changes its face sveral times every day. In the morning, taxis and small buses are allowed to enter. Here most of the organized trips start in the desert, the High Atlas or to the Seaside. From noon, the square slowly fills with acrobats, snake charmers and musicians, and in the afternoon about 50 mobile restaurants are rebuilt every day. Towards evening, the square filles with spectators who want to get entertained. There are Berbers, Arabs and dark-skinned Haratins, representatives of all Moroccan ethnic groups. They all celebrate here their own music and cultural heritage. Even the somewhat attentive tourist will soon be able to distinguish between three musical styles, such as Arabic music, Berber music with drums, banjo and mutual chanting, and the trancemusics of the colorful dark- skinned Gnawas with their castanets and the Gembri, a square “bass guitar” made from camel skin, which can hardly produce more than four tones.

Around the artists of the Jemaa el Fna – they are called “Halikis” – there gether Halquas, groups of spectators and listeners, who are always actively involved in the happening. Halqua means Circle. Artist and audience form an inseparable unity. There are acrobats, musicians, travesty dancers – it is amazing in a homophobic country, but it is actually men who perform the erotic belly dance dressed as women. This is because, in a Muslim society, the Shichat, the belly dance, has been associated with prostitution and is therefore not performed publicly by women. There you can find story tellers and quacksalvers, who mostly advertise potency drugs under the curious eyes of the men. There are improvised mini-golf and bottle- fishing and, of course, the famous snake charmers and monky tamers who have already done business with the tourists during the day. All around you will find orange juice stands, where glass of freshly squeezed orange juice costs only 40 dirhams. It is very interesting and revealing how a halqua is created. Usually there

are two musicians or artists who work according to the principle of oppositeness, Good-Corp/Bad-Corp, wise man – foolish person, sad – humorous, polarizing the viewers and taking them into the process. If finally the group of the spectators is large enough and enough money collected, the performance starts.

How do you behave as a stranger, as a tourist at the place?