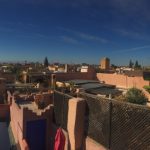 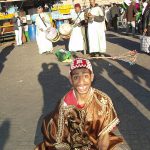 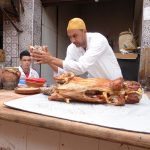 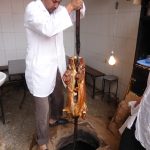 Understanding Marrakech – Insights that tourist guides do not give

Marrakech, the “Red City” is not a organic grown city, but a well-designed Berber metropolis created by city planners almost 1000 years ago on the drawing board. Even today, this structure is almost unchanged and the city still “works” according to the same principles. So how is the city structured and how does it work?

Already in the 11th and 12th century the town founders of the Almoravids and Almohards built a 19km long city wall around the city, which has been preserved til nowardays. In the center, a huge meeting place was laid out, the Jemaa el Fna, the place where the heart of Morocco still beats today. The locals meet and enjoy themselves 365 days a year among snake charmers, storytellers, acrobats, dancers, magicians and musicians. The tourists are in the clear minority. Of course, where there are many people, they also need something to eat. So there are not only food and juice stands on the square, but also a small “restaurant-street”, where since the beginning daily large clay ovens are heated in the ground, in which then up to 20 lambs and sheep are lowered and baked. It is the favorite dish of Moroccans, “Mechoui”, a festive dinner. Presumably, they are the oldest continuously existing “restaurants” in the world. Around the square are the souks, the big bazaars, where you can buy something you do not buy every day like clothes, shoes, bags, jewelery, crockery, etc. At the exits and central spots of the souks you find small squares or Road widenings where the “transporters” with hand and donkey carts and sometimes even with Töftöfs wait to deliver the goods, which bought the Marrakech in the Suk into the Riads. In the largest square in the souk of the Rahba Khedima, near the former slave market, since the founding of the city henna women stomp unnoticed by the tourists big heaps of henna powder in mortars. Even today, it is here where the Marrakshis buy the henna for the elaborate wedding tattoos.

Around the belt of the souks the neighborhoods are grouped, the many residential areas, each with a completely different flair, smell, population and social levels. This ranges from the royal district (Kasbah) to the tanners’ quarter. These neighborhoods have village character. No house has more than two floors, almost always crowned by a terrace from which one usually has a view over the entire city. Between the neighborhoods there are only a few connecting roads. These roads were not built for cars at the time. At most the mopeds rattle today to the chagrin of pedestrians through these lifelines. The neighbourhoods, on the other hand, are closed administrative units, living organisms with organs and organelles: in each quarter, there is a market open from morning to night, seven days a week. Here you can buy fresh vegetables, fruits, meat and fish. In each district there are mosques, madrasas and public wells. There are still houses, no running water. That’s why public wells are found in every sector. Water has always been very precious in Morocco and that’s why the habitants take their bath only once a week in a hammam. Nevertheless, the Moroccans are very clean because of the cleaning rituals they practise five times a day in the vestibule of the mosques. One liter of water is sufficient for the “Oudoue”. Each district has numerous hammams (public baths, the “bathrooms” of many families who still do not have their own bathroom in the house). They are strictly separated according to men and women. The Farnatchi, the heating place of the hammam also serves as a cooking place for the “Tanjia”, the specialty of Marrakech, a “goulash in a clay jug” that the women bring here here to cook. In addition, one meets again and again on always public ovens, in which the women carry their bread for baking. Finally, the office of the Moquadam, the quartermaster may not be missing. It is him who knows everyone and he is the undisputed authority in all neighborhood conflicts, administrative and construction activities. From the main street of the quartet branches off countless lanes lead into the Derbs (contiguous rows of houses). They branch out like a tree and usually have only one access. A night watchman watches over each Derb at night, and the residents pay for it in solidarity. So you can safely move around at night anywhere and safely return to the riad. Over 90% of the streets in the medina are dead ends. This made the city virtually impregnable in the past and still causes to the stranger great problems of orientation. There are almost no direct routes. There are one or more “boutiques”, “corner shops” where you can buy about 90% of what you need for your daily life. The product range includes toilet paper, pens, olive oil, pasta, salt, sugar, toothpaste, coffee, tea, yoghurt, milk, soft drinks, fresh flatbread and sanitary napkins and so on. Here you will find – well to know for the tourists in this city – always also water in half and 1.5-liter bottles, chilled and uncooled. The boutiques are open as long as people are on the street. The houses in the Derbs look almost all the same. They hardly have windows to the outside. Even the doors are similar and reveal nothing about the wealth or social status of the residents. Even if you have the privilege of being let in through one of the doors, you will hardly see anything of the house at first. You enter a dark corridor and it leads to a courtyard where there are wells and plants. All rooms open onto the patio, which in turn opens onto the sky. Here, unlike the densely populated and noisy streets and squares, it is pleasantly quiet and cool. They call the houses “Riad”. That means paradise. The discretion, seclusion, privacy and silence in these houses exceeds anything that a European can imagine. That is the true quality of life in Marrakech. That’s the way to live comfortably and calm in a big city. The Riads are sanctuaries in the middle of the loud and pulsating life of the big vibrant city. The Riads usually have a terrace, which is more the domain of women. Again, discretion is the top priority. You do not show up on the rooftops and do not chat from terrace to terrace. If you see a neighbor or a stranger on the terrace, you discreetly turn away and pretend that you have not seen each other.

The city is amazingly clean. For 1000 years here “waste separation” is practiced. In the evening you put your garbage can with the garbage in front of the door and in the morning it is emptied. Fruit, vegetable and bread left over are separated and in the morning old men come with handcart through the Derbs and make loud attention to themselves. Thus, the housewife recognizes at the call of the collector who stands in front of the door and gives him the leftover bread or vegetable waste, which he uses to fed his own sheep or chickens, that often live in the homes of the poorer residents. The woman receives in retunr a handful of detergent or washing powder. This is how the city “digests itself every day”.
In the past, more than 500,000 people lived inside the city walls. Today there are still about 350,000. And here is also a problem: Those who can afford to give up their homes in the medina prefer to move to the suburbs with their ugly apartment blocks, which are hardly livable without air conditioning in the summer (it can raise up to 50 degrees Celsius). Here the infrastructure and the access are better. Those who stay in the medina are more likely to be assigned to the lower social class. Here unemployment is high, some quarters are overpopulated and the extended family is quite common. The abandoned by the Marrakesh Riads are often speculative objects of countless real estate agencies. Rich Europeans purchase them, often spending only a few weeks a year in Marrakech. Especially in the better neighborhoods there is an enormous social gap between extremely poor Moroccans and very wealthy Europeans. Knowing this, it is easy to understand that as a stranger you are often beguiled by children or adolescents. Despite everything: The Marrakhsis come to terms with the phenomenon and are usually peaceful and helpful.

Around the medina, a modern Marrakech has grown in the past 100 years: here, too, there are very different quarters. The Boulevard Mohamed V connects the medina with the district of Guiliz, the French-influenced New Town from the time of the protectorate (1912-1956). There are state-of-the-art shopping centers, cinemas, the modern train station, clubs, restaurants and office buildings. Pretty, self-confident young Moroccan women, undisguised, dressed in western fashionstyle and with open long hair, also stroll here, often even hand in hand with their boyfriend – a Nogo in the medina.

If you are involved with the jetset, you will be domiciled in the “Hivernage”, a green residential area between Medina and Guiliz. Here you find as well the large luxury hotels of international standard, the banks and luxury clubs.
Marrakech has many well-maintained beautiful parks, green oases in the “Red City”. Of particular interest to tourists are the Majorelle Garden with the Museum and Villa of Yves Saint Laurent, the Anima Garden by André Heller (just outside) and the garden of the Kotubia Mosque. But the Cyperpark on the Boulevard Mohamed V with its free Wi-Fi is worth a visit as well. Old and young meet here to have siesta under the old trees and chat with the mobile phone.

Finally, in the north of the city there is still the “Palmaire”, a large date-palm oasis, which is drying up more and more today due to lack of water. Here, however, there are luxury enclaves and resorts with golf courses, villas and night clubs that can compete with the most exclusive and expensive in the world.

So Marrakech is a city of contrasts, modern and medieval, village and metropolitan at the same time. More than in other cities in North Africa, international audiences, Berbers and Arabs live here in peaceful, with tolerance and in an synergetic coexistence.